The Secrets Behind Camouflaged Cars You Want to Know About

Do you know why the design and the features of the concerned vehicles need to be strictly hidden and remain unrecognized from the world?

Whenever an automaker announces news as to upcoming releases and updates, it not only stirs up the attention of regular car enthusiasts. It also attracts the attention of photographers and magazine staff.

This is aside from those people who are willing to go through a needle’s eye just to get an early glimpse of the product. From the manufacturer’s point of view, the need to build anticipation from the world is a must. That’s why the design and the features of the concerned vehicles need to be strictly hidden and remain unrecognized from the world.

If the design and outfitting of the vehicle are revealed to the world, this could affect the sales and excitement on and after the reveal. As Mazda’s senior designer manager, Ken Saward said - they need to keep people anxious for the new vehicle to come out. He even compared it to a wedding ceremony wherein the bride is hidden until the ceremony.

Why are New Cars Camouflaged?

As we said earlier, the manufacturers do their best to keep the pre-released vehicle a secret until the supposed reveal. So why do they need to take it out in public if that’s the case?

They would have to go through all that trouble of wrapping up the car just to camouflage it. Not only that, they also have to assign their engineers to manage the whole wrapping process.

They would need to make sure the lines and shapes of the vehicle are well-hidden from prying eyes and spies. It’s because the manufacturers need to know how the pre-released vehicle will perform in real-life driving scenarios. This is vital info that’s necessary for the public to know once they reveal the car. 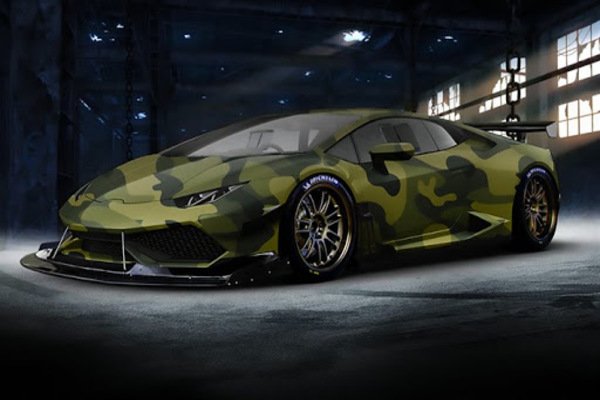 How to Recognize a Camouflaged Car?

Camouflaged cars, despite the word “camouflage”, are actually easy to notice. There’s no standard as to how a vehicle should be camouflaged when undergoing tests in the real world. But the fact is that they are all covered by materials that will conceal the vehicle’s exterior outfitting.

This includes the paint, the bumpers, the roof, and even the spoilers if any. Of course, there are some areas on the vehicle that are still left visible. This includes the mirrors, the wheels, the headlights, the vents, and the turn lights. Camouflaged supercars, despite the word “camouflage”, are actually easy to notice

This is usually done using a variety of materials that the engineers thought would do the job best. But some of the common materials are vinyl wraps printed with various designs. Though it’s easy to think that vehicles wrapped in printed vinyl may easily reveal lines and curves.

Some automakers decide to go one step further in concealing their product. This is when other materials like cloth and cushioning are used to hide the rise and lows in the exterior design. These are packed together securely. This is to make sure that none of the camouflaging elements fall off or get torn while the car is being tested on the road.